I was up at 1am last night watching the Food Network.  I really should have been sleeping but I couldn’t peel my eyes away from the TV.  I was watching a special show on “chocolate” and different chefs were discussing their all-time favorite chocolate desserts.  Alton Brown’s favorite was this homemade chocolate pudding from  the Hominy Grill in Charleston, SC. Ooooh, it looked sooooooooo good. But then….came Bobby Flay’s favorite…… are you ready?…..a  decadent smore pie from the Buckeye Roadhouse in California. Holy hell.  Pure delicious looking evil. Right up my gluttonous alley. That’s all I can say.  Here’s a picture I found online: 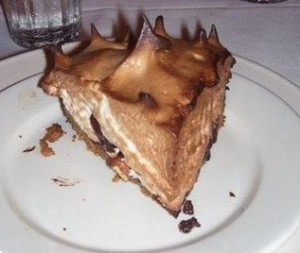 I mean if THIS doesn’t evoke campfire memories, of ooey gooey burnt mashmallows, melted chocolate, and graham crackers with an accidental wood flake thrown in, I don’t know what will. I have GOT to make this. I’m going to research recipes today……

Okay, UPDATE….found a recipe that looks divine courtesy of Smitten Kitchen.  I’ll let you know how it turns out. Here’s a link to the recipe: http://smittenkitchen.com/2008/06/smore-pie/ .

ANOTHER UPDATE: See the “comments” section below for the actual Smore Pie recipe from Buckeye Roadhouse…..holy schmoly…….give a big thank you to Sabine everyone!

Promote Your Page Too